10 reasons why Commercial Register is a scam

Articles > 10 reasons why Commercial Register is a scam

[UPDATE June 2017 – we’ve just added a new article about this here which tells you what to do if they demand payment. Summary; it’s still a scam but we’ve identified the man behind it!]

If you’ve been unfortunate enough to receive a letter in the post from something called Commercial Register you could be forgiven for thinking that it was something official. In fact, nothing could be further from the truth.

It’s a scam. Pure and simple.

Everything about this form screams ‘official’ and the language used within it is specifically designed to make you take action. Immediately.

The inclusion of simple words like ‘deadline’, ‘promptly’ and ‘compliance’ all lead you, at first glance, to believe that you must do something with this form.

Take our advice and put it in the bin. 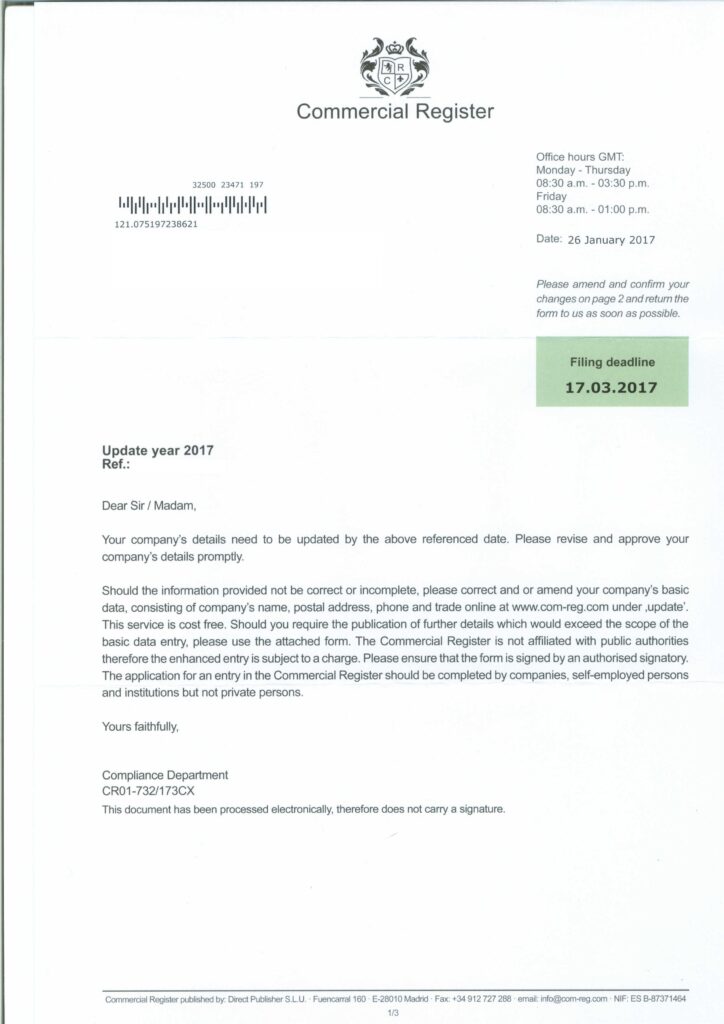 Here are ten good reasons why this is nothing more than a modern-day confidence trick.

If you check the name ‘Commercial Register’ on Google you will find that currently, the first result is a Saudi Arabian Government website and the next result down talks about the Commercial Register of firms in Switzerland. In fact, the more you look down the list of page one results on Google the more you would think that this is something official. Everything on that page is about official Government departments.

The truth is that the name has been chosen to deliberately confuse you. It is NOT to do with any Government department at all.

2. There is a barcode on the letter and the form

Barcodes on letters aren’t common. They are however quite prevalent on letters you may receive from places like HMRC or other Government departments. The inclusion of these ‘barcodes’ are simply there to visually suggest that this is an official letter.

Of course, if it was a real barcode then there would by a series of numbers underneath it and their absence tells you everything you need to know. In reality it’s not a barcode at all, it’s just a series of lines. So, the proclamation at the top of page two which says ‘This form is designed to be read by machine’ might actually be true, but it certainly won’t be reading the barcode.

3. There is a big green box saying ‘Filing Deadline’

This is another example of some very clever design. The word deadline is a trigger word for many people. We are all used to deadlines and we all know the consequences of missing a ‘deadline’ when filing an official Government required form like the VAT or PAYE.

This form has the deadline in it’s own box to stand out and just above it is the clever wording ‘Please amend and confirm your changes on page 2 and return the form to us as soon as possible’.

Clear instructions there to ‘amend and confirm’ and ‘return the form’ with the final command being ‘as soon as possible’. It’s easy to see how this might be taken as something you have to action immediately.

4. There is a reference number

In a further aping of official letters, it includes a completely bogus reference number. No one uses reference numbers on anything other than ’official’ letters so logically the inclusion of this number is supposed to give it some real importance.

5. The first paragraph commands you to take action

How would any of us react when faced with what looks like an official form and it is instructing us to take action immediately?

6. It is ‘signed’ by the Compliance Department

To reinforce the formal language used through the letter and to further frighten you into completing this, the form is ‘signed’ by the Compliance Department. And we all know what compliance departments do, don’t we?

Who on earth sends you forms with all your company details already completed other than official bodies? The fact that it has your business details correctly listed means most people will immediately think that this is something official. And this is the irony.

They are sending you your publicly available business details and asking you to pay them to include them on a website you have never heard of.

Very clever this bit. The price of the service is hidden in plain view. But what they do is write it as 863GBP which is of course not a way anyone would write a price. You or I would write or type £863 but by adding on GBP after the numbers it is an unfamiliar presentation of the price and deliberately designed to confuse.

Very helpfully they include a fax number at the bottom of the letter but of course, most of us don’t have a fax machine these days. In fact, other than the fax number the only other piece of contact detail worth anything is the email address which is not available on their website and may simply go to a dead email box. The chances of you being able to turn up at their offices are non-existent as they claim to be based in Madrid.

Actually, what you are getting is detailed in small print on the reverse of the form in small letters. It is an image, probably of your logo of just 600 x 350 pixels. For three years as a minimum! Point 5 on the small print suggests that this can be extended beyond the three-year period (presumably if you don’t cancel) and what’s more you have just three weeks to pay them. Or else.

If you visit their website and look for ‘Trades’ you will see the sort of thing they provide and no doubt a list of the companies that have been caught out by this.

If you do read the text in the letter, all seven lines of it, you will find the truth of what this is all about. The wording is so condensed that most people simply will not read it, especially as it has been written to deliberately confuse. If you do manage to wade through it though here are the takeaway nuggets;

There’s nothing new with this particular scam. We’ve seen it many times before except previously it used to be done with small printed directories.

The move into the online world now opens up enormous possibilities and there is nothing legally stopping them doing this.

The form, if you read the detail and small print, makes it clear that you are signing up for advertising. The price is clearly stated, twice and the term of the contract is also stated. They could and I’m sure no doubt will, claim that this is purely voluntary and if you choose to return the form you are legally bound to pay for the advertising.

The fact that the advertising is on an obscure website and is ridiculously small is irrelevant. They will claim they are doing nothing wrong.

Being a Digital firm we thought it would be interesting to take a slightly deeper look at their website to see if it threw up any clues. Here’s what we found.

If you receive a letter from Commercial Register, please do yourself a favour and throw it away immediately.

If you’ve receive one of these letters or have been caught out buy this then feel free to leave a message below.