Why Google’s link penalties are stupid, pointless and damaging business

We are getting used to having to clean up backlinks now and like most other decent firms out there we follow a rigorous process to ensure that we weed out everything that may have caused the problem in the first place.

Of course, getting rid of everything that is causing a problem is nigh on impossible and this is the root of the issue.

Buying links was far too easy because in the main it was an automated process. Anyone could jump online and get 1,000, 10,000 or a million backlinks for next to nothing. Links were cheap because it made no difference where they came from as long as they linked back to a target site and usually had the ‘money’ keywords in them.

So, scripts generated millions of links on sites set up exclusively for the purpose of hosting these links, but no thought was ever given to removing them. And when you start to try and remove them then the problems really begin.

Many of these automated sites have no contact details, no webmaster looking after them and even if you can get through to someone the chances of getting a response are slim indeed. Of those that do respond at least half of them want money to remove the links which leave us with the considerate and caring webmasters who do respond, appreciate the problem and remove the link for you. Sadly these webmasters are few and far between.

Practically, therefore, we are dealing with an almighty mess that needs to be cleaned up and it takes time, patience and perseverance to prevail.

We started working with a client earlier this year who came to us because their keyword positions were dropping. We advised them fairly quickly that their backlink profile was the source of the trouble and it needed cleaning up urgently. As soon as we were engaged we set about the process of clean up but four weeks in Google spotted the problem backlinks and applied a manual penalty.

The penalty has been a pain the backside for the client. They don’t rank any more for the keywords that bring in the revenue for them and they are losing money, fast.

There will be some out there that may feel that it is their fault, however, like so many other businesses out there now in the same situation, this was something they neither wanted, expected nor deserved. Like so many others they employed a firm to ‘do some SEO’ and like so many were amazed to find themselves shooting up the rankings. They didn’t employ them to use black hat tactics, nor to do anything that would deliberately jeopardise the firm’s reputation or online business. Like so many others, they were duped by lazy SEO.

The firms that caused this are mostly long gone, or are refusing to take responsibility for their actions and websites that used to offer to sell you backlinks are disappearing overnight.

So here we are cleaning up the mess, but the issue here lies with how Google are treating firms who find themselves in this unfortunate position.

We’ve long argued that this cleanup and penalising of firms is pointless and unnecessary. Right now our client is faced with a long clean-up project and no idea of when they might expect to be free of Google’s swingeing penalty.

We followed our usual process of downloading all the links we could find, over 300,000 in this case, and set about weeding them out. We contacted hundreds of webmasters and following a few weeks of effort finally put together a disavow file to go with the file of links we had already removed. We asked Google for reconsideration but this morning found this; 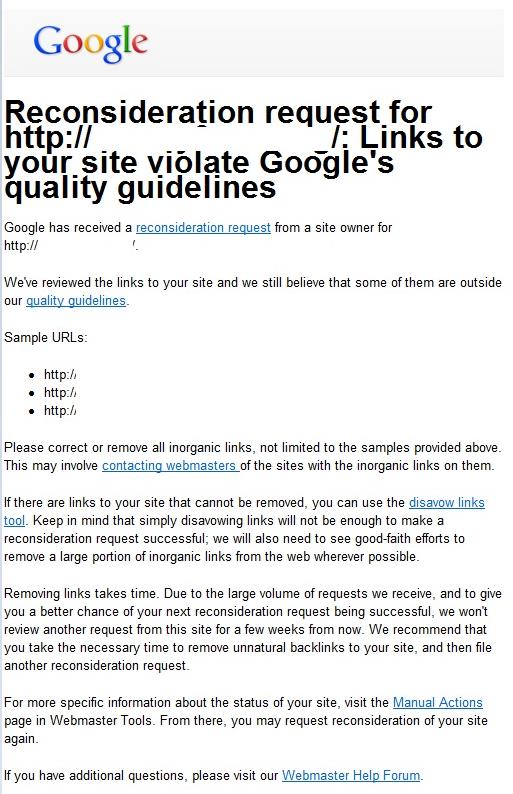 Now we’ve blanked out some important bits, such as who the client is but there are a number of worrying elements to this refusal.

Firstly, and most worryingly, the three links they give as examples do not show in Google’s’ own list of links. Nowhere in Webmaster tools do these three links show, nor indeed many other toxic links that we have found. In fact these three didn’t appear in the 330,000 links we found for this client which suggests that the problem is even bigger than most of the link tools out there.

The problem therefore for the average website owner is how on earth are you supposed to find and remove links that Google won’t tell you are there but expect you to find? And if Google knows they are there, and against their webmaster guidelines, then why aren’t they showing in Webmaster Tools?

The second part, which we already knew is that you need to show a significant and sustained effort to clean up links otherwise Google simply won’t pay attention to you. Disavowing the links is not enough; you need to be seen to have sweated to remove them.

The final bit which is enough to make anyone’s blood boil is that Google “won’t review another request from this site for a few weeks from now”.

How on earth is this allowed? How can one of the biggest companies on the earth get away with telling other businesses that they are switching off their revenue stream and keeping it switched off for an indeterminate time? Surely unless Google can prove, beyond doubt that the company have been deliberately trying to manipulate the rankings (which in this case they haven’t) then acting a judge, jury and executioner is an abuse of a monopoly position.

It’s enough to make most businesses give up. And all of it is totally unnecessary.

Google already knows which links are right and which are wrong. It could simply ignore those that are wrong in any algorithmic calculation and only count the good ones. Surely this is a better way of dealing with it?

We’re convinced this is wrong and massively open to abuse. There is nothing stopping us today creating millions of links which are totally against Webmaster guidelines and pointing them at a competitor to damage their site. How would Google know? How would anyone know? And frankly, how would that competitor ever clean up the mess?

Google has dug itself quite a deep pit here and should someone choose to take them to task over this I doubt there will be any reasonable defence for this behaviour. Stop it now Google, whilst you still have a good name.