Photobucket: A lesson in how not to treat your customers

Articles > Photobucket: A lesson in how not to treat your customers

Back in July the internet world woke up to find that the images that should be showing on bulletin boards, blogs, forums and shopping sites such as eBay and Amazon, had disappeared.

What they found instead was the Photobucket ‘P500’ error image. 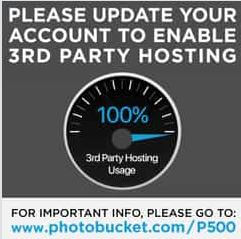 Photobucket had, overnight, pivoted their business model to disallow users from sharing images on any other website unless they paid for a ‘premium’ plan.

One of the biggest issues, however, was that it came out of the blue. No one knew about it. There were no announcements, no emails warning people that it was about to happen and more importantly, no explanation.

Given that their mission statement appears to be “Your photos are our number one priority. It’s our mission to help you share, store, edit and enjoy them — all in one place” it was a very strange move.

Naturally, the internet was up in arms about it; just search Facebook, Twitter or Reddit to see for yourself. Bulletin boards across the globe were crippled as previously vibrant threads with detailed images disappeared. People who had used Photobucket for hosting these images successfully for over ten years found that they literally had to start again with what for some, amounted to a lifetimes work.

Taking a step back and looking at it from a commercial point of view, there must have been a growing imperative to step away from a model primarily reliant on advertising. With a growth in customer numbers and an increase in bandwidth usage, their cost base must have been spiralling. It’s a by-product of their success.

The solution however surely was not what they have come up with?

Firstly, why make the change with no notice? Why simply change overnight and then dump on your customers?

Secondly, how on earth did they arrive at their pricing point of $399? When so many people use their service specifically for third party hosting and nothing else, why provide this service only at the highest price point you have?

Finally, unless they have deliberately set out to rid themselves forever of customers using ‘free’ accounts then how will they survive the fallout from this?

Their website is currently drowning in crass advertising and is virtually unusable.

One commentator on Reddit summed the problem up nicely;

“you cant even begin to imagine what this will mean to internet forums and blogs. older internet users remember what a dumpster fire the internet was when angelfire, geocities, and tripod stopped offering free hosting, broken links everywhere and it was the exact same cause, they started out to give everyone free hosting, but they reached critical mass as more people signed up for the free than the paid.”

The backlash from this decision was inevitable. Many people closed their accounts, and more, I’m sure, are planning to do so when their annual plan expires. When there are so many other alternatives out there it seems that Photobucket is relying on inertia from their customer base to survive.

I doubt they will be allowed to.

From a Marketing Communications point of view, this was a case study on how not to do it.

Not only did they dump this on their users with zero notice, but they compounded the issue with their communications, or lack of them.

Four months on from the start of this process their Facebook and Twitter ‘Customer Services’ teams are blithely carrying on as if nothing has happened and people are being ignored or stuck into pre-defined responses.

People have stopped complaining on the Photobucket forum as they were being asked to email them, at which point they got a ‘canned’ email which amounted to nothing more than FAQ’s. None of which answered any of the questions their customers had.

Today, most of their customers have taken to Twitter or Facebook to vent their anger and they are not happy. Everything they now do, no matter how positive, is subject to a barrage of abuse and hate.

This is nothing short of a P.R disaster and has left a very bad taste in the mouth for many people. Given that Photobucket was set up as a photo storage and sharing website, removing the sharing option unless you pay $399 seems bizarre. People are still feeling that they are being held to ransom.

It is highly unlikely that Photobucket will rethink this policy, or even survive as a business. Even if they do then they may end up being remembered as the people who broke the internet.