EDIT: November 2015 – we are now 18 months on from this original post and we have reached a grand total of 104 likes. Yes, just four more in the last 18 months. Pathetic really. But when I tell you that we completed disengaged with Facebook immediately after this original post then perhaps it starts to make sense. I’ve added a bit more at the bottom of this post – scroll down to see what has happened in the interim…

We’ve just reached our first milestone on Facebook of 100 likes! Whilst it’s all well and good celebrating this as an achievement, the question this raises is: does it actually mean anything?

We’ve been banging on about Facebook for over 2 years now, but it just seems to be getting worse, and it’s very rare we have anything nice to say. Facebook no longer seems to be a social channel, but an advertising channel; despite the fact that when we promote our own site content, Facebook chokes down the amount of people it shows it too – unless of course we pay.

As you can see above we put out 3 posts about a recent business fair we were at, and these were just simple text status updates with no links or images – and these each received 34+ Total Reach, whilst our 2 new blog posts on our site we shared received just 2 and 5.

This is the way Facebook has been going for a long time now, and despite the fact we have just reached 100 likes, this probably won’t change the amount of people who see our posts, not unless we’re willing to cough up some money in exchange for this. This just doesn’t make sense, we write good, quality, unique content and promote it the way Facebook intended us too, to our own follower base who have all chose to follow us; and yet they won’t even show it to everyone unless we pay to “boost” our post.

We’re going to be conducting an experiment today, launching this post followed by a simple text status update, and comparing what the total reach of both are. We predict, judging by the history of our posts that this article itself will reach less than 10% of our total follower base, whilst the status update will reach at least 25% of them.

Well, I did say I’d keep you updated so here it is.

Facebook is now the biggest content platform on the planet, but it produces no content itself. The stuff that is there is created by you and me and if you are a business and want people to see the good work that you have done then as long as you are prepared to pay for it then it can happen. If like me however, you don’t want to pay then you are now well and truly scuppered.

We’ve been creating some good content recently and sending it out as well as sharing some great content from other people. Here’s what the dashboard looks like; 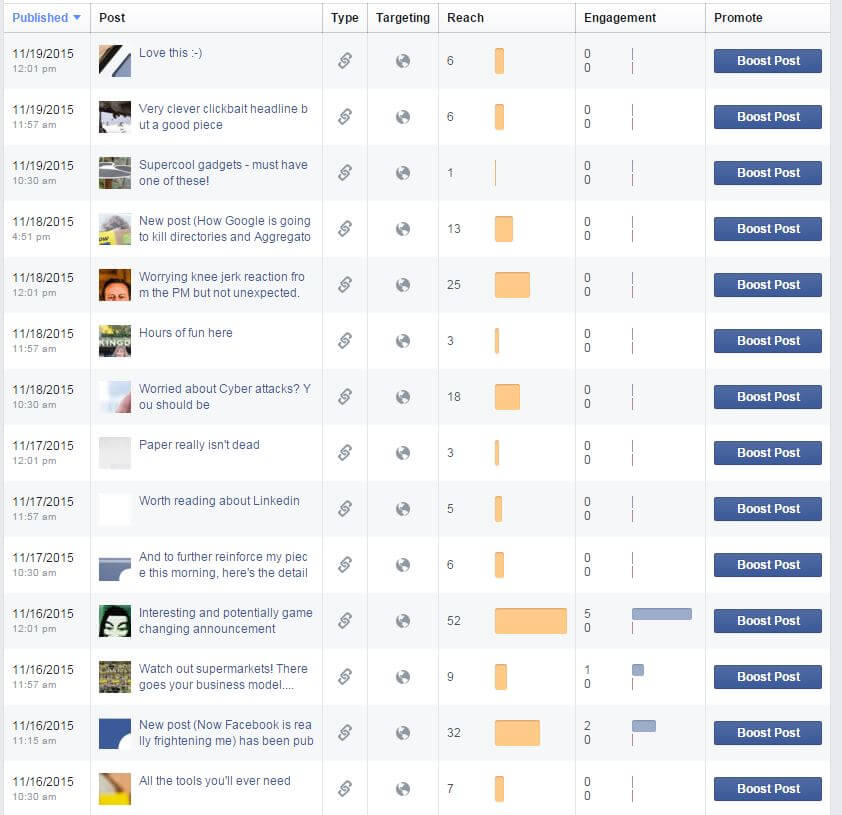 Really interesting to see that our biggest reach was a story from a national newspaper. Second biggest however, and credit where it’s due, is an original item I posted about Facebook the other day. So it looks on the face of it that original content can get an airing. But the further I go down the list I can see that the very best article I have written in ages has just reached just one person whereas anything about Facebook gets a lot of traffic. So including the word Facebook in your post, even if it’s not about Facebook, seems to be a trick. I must try that more often…..

Anyway, the bottom line is that we are virtually disengaged with the platform as we have established that even if we are active on a daily basis we can’t get any share of voice. So it’s frankly not worth the effort. Creating great content and pushing it from other areas however, is worth the effort and for this Twitter stands head and shoulders above the rest.

There appears to be no compelling logic in creating great content only for Facebook to be the final arbiter on whether it should be shown or not.

I haven’t been on my personal Facebook feed for almost an entire year and whilst I may re-engage with it next month after the year is up, I doubt that it will get a great deal of my time. Times have moved on and despite Facebook’s recent foray into Google’s territory as a search engine, I see nothing that would compel me to trust them with my personal data or my creative output.