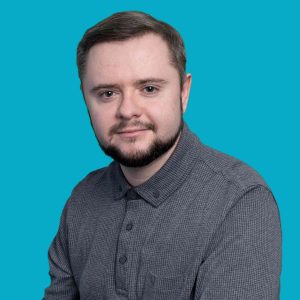 The team at Aqueous are delighted to announce that we recently promoted our SEO and content strategy specialist, Ryan to Senior Digital Marketing Analyst.  This is in recognition of the excellent work Ryan has been responsible for delivering since joining the company back in 2020.

Ryan has managed many customer accounts in his time at Aqueous as well as producing some very complex content strategies, several of which have been shortlisted for prestigious national awards.

We asked Ryan 10 quick fire questions, so that you can get to know him a bit better:

What are you looking forward to most with your new role?

I’m looking forward to gaining more support in more time consuming areas of my job; such as keyword research, content uploads, addressing alt-text. This will allow me to spend more time in the more investigative areas of my role such as generating great content ideas for our new customers strategies. I’m also looking forward to passing on some of my skills to other, newer members of the team so we can build more content experts within the team.

What has been your most rewarding time at work since you started at Aqueous?

This promotion. It shows that the hard work I’ve put into my role since beginning my Aqueous journey is not just paying off, but being recognised by other members of the team. Aside from that, I’d it would be one of my content strategies being nominated for an award.

If you could paint the Aqueous office any colour you like, what would you choose and why?

Bright Orange or Lime Green – because they’re unusual colours for an office and it’d make people take notice when they walk through the doors!

In a parallel universe where you are not an SEO and Content Strategy specialist, what job might you be doing?

I’d have most likely pursued a career in Journalism as that’s what my degree was in or ended up working in Public Relations as that was the module which sent me on my marketing journey that lead me to Aqueous.

What is your favourite song on the Aqueous playlist and why?

Drink by Alestorm – because I still can’t believe that I’ve managed to add a song by a Scottish pirate metal band to a work Spotify playlist and get away with it. And that’s tame compared to some of the other things I listen to in my spare time!

What’s the best music gig you have been to and why?

I’ve been to many gigs and seen many great festival sets over the years, but nothing has compared to Rammstein at Milton Keynes Bowl in 2019. I’d seen them a few times before at festivals and at arenas, but I’ve never seen a live show quite like it. The stage set looked like something out of a dystopian sci-fi film and packed enough pyro to burn half of Milton Keynes if they wanted to! Hands down the best live performance I’ve ever seen and it’ll take something special to top it.

Have you ever met anyone famous? Where and when was this?

Probably the most famous person I’ve ever met is David Moyes back when he was Everton’s manager. My first ever job was working as a steward at Goodison Park with my Dad and I remember us both walking past him on our way to the Main Stand. He looked over, smiled and said “alright boys” in a thick Scottish accent.

I’ve also met Graeme Sharp when I got my NVQ in Crowd Safety, but he was a little before my time sadly.

Do you have any hidden talents you’d like to improve on?

I’ve tried several times over the years to learn another language. It’s always been something I’ve been keen to develop and I got the point where I was quite confident in basic Spanish and German (particularly the former during lockdown, the latter was exclusively reserved for when I’d go over to Munich for Oktoberfest!) – but I’ve never stuck with it.

If you won the lottery, what’s the first thing you’d spend the money on?

A nice long holiday for me and the missus!

If you were famous, what would you be famous for?

I’d love to be a filmmaker, probably in the mould of someone like Quentin Tarantino or a David Fincher.

This article was written by Aqueous Digital