Is organic traffic a right or a privilege?

Articles > Is organic traffic a right or a privilege?

Exactly one year on from this post I have been amazed by how much (and how little) everything has changed.

I wrote at the bottom of this piece last year “The $64,000 question I would contend is ‘When did it become a right to NOT have to pay for your advertising?’” not thinking that it was anything more than a rhetorical question. In the last year however, Google has made more moves to ensure that everyone pays something to join the party.

In February 2016 they removed the PPC adverts on the right-hand side and extended the top three to show four advertisements, thereby pushing organic listings further down below the fold. On mobiles, where this matters more now that 50% of all search is made on a mobile device, the organics are being buried. In many searches advertising followed by Google My Business listings means that organic listings are hardly noticeable.

Add to this the current trial in San Francisco Bay Area, USA to push people searching for a ‘contractor’ to use their new Beta service which incorporates your Google My Business information and it is evident that the days of free advertising are rapidly disappearing.

Of course, there are still millions of searches where organic returns are the mainstay of the results but much like the old directories where 75% of the book was free entries, the free entries are largely ignored where the advertising dominates. Google is arranging its landscape so you see advertising where they make more money and this should be no surprise.

The new questions I suppose is “How long before there is a backlash against this monopolistic behaviour”?

In the 1990’s Yellow Pages tried ‘re-scoping’ directory areas under the rationale that it gave users more relevant results but the main outcome was 10 years under the watchful eye of the MMC and OFT with a legal cap on revenues. It killed the business at a time when the internet was starting to eat their lunch.

All that is needed now is for the CMA to receive enough complaints from businesses that Google is forcing them to pay disproportionate amounts for their advertising and the whole market could be thrown into confusion.

I was struck recently by an online conversation where someone was bemoaning the fact that Google has almost removed their website from its search results causing huge amount of damage to their revenue flows. This particular website had not paid for any advertising anywhere, nor to appear on any of Google’s properties, yet was happily cashing in thousands of pounds a month from appearing in organic search.

Naturally the removal of their site from search was something of a body blow but I was struck by how much we all take organic traffic for granted. 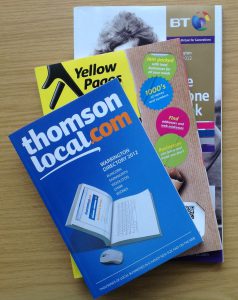 If we go back fifteen years there was a dominant media in the advertising market called directories. Every business was entitled to have a ‘Free’ line entry in a single directory which would put them in the section which best reflected what they did. Even back then though the producers of these directories were at pains to point out that what they were giving away was a ‘discretionary’ line entry. They were not obliged to provide it but did so predominantly to provide a more comprehensive product for end users and ultimately to generate a prospecting list for their sales people.

The books were delivered for free and paid for by advertisers, most of whom generated a positive ROI from their advertising so all in all it was a virtuous circle. Everybody won from the process or at least there were very few losers.

Fast forward to today and the entire landscape has changed. Google dominates in a fashion that could not have been imagined back in 2000 and directories are all but gone.

The ‘discretionary’ free entry that we used to get is still there but the paradigm has shifted; you now need a website to join the fun. Get one of those and you can ask Google to come and index your website, entirely for free and based on what it finds it can rank you in the most relevant searches for the things you do or sell. Sounds familiar?

Much like the directories once you have a website indexed on Google it will offer you advertising, to give you even more chance to connect with people who want the things you sell.

The key difference here is that Google can and will use its ‘discretion’ as to whether your website appears anywhere in any of its search results and can change its mind on a daily basis. Unlike the old directory days when you had one entry in one place you now have hundreds, or in the case of e-commerce thousands of places which need to appear in search. As do all your competitors so it becomes a bun fight to get yourself seen amongst the noise. Barriers to entry are lower so you don’t need heaps of capital to compete and some of the best websites are run by people in bedrooms on a part time basis.

Which brings us back to our unfortunate website owner. They are no longer generating the volumes of revenue they once were from their website because Google has removed their ‘discretionary’ entries. Sure it hurts but they are and always were ‘discretionary’.

There is no right of appeal and no higher authority to which you can complain; you just have to lump it.

All of which kind of points us back to organic traffic being a privilege rather than a right. Of course this isn’t made clear to people when they jump into the pool to start with; generally they find this out when they start to swim in the deep end with the big boys.

The fact that Google is a ‘de facto’ monopoly provider does not help the piece and will naturally lead to accusations of unfair tactics, bullying from a monopoly provider and a callous disregard for small businesses everywhere.

We have all heard these accusations and they are well understood but no one seems to ask the key question behind all of this. The $64,000 question I would contend is ‘When did it become a right to NOT have to pay for your advertising?’

If we can answer this then we are some way towards deciding whether organic traffic is a privilege or a right.