Articles > How to guarantee I won’t read your email

It might seem an unusual title for a blog post, but it’s about time this issue was addressed.

Every week I receive more than 1,200 emails, the vast majority my life is better off without.

So, why am I getting them?

Clearly there are distribution lists to which I have chosen to belong and there are emails from work colleagues and friends but the majority – more than 83 per cent ­at most recent count – are messages I neither want nor need.

They add no value to my life and are nothing more than electronic detritus.

Some are from historic purchases. Buy one item, and spend the rest of your life trying to escape from an associated mailing list.

I think we all know the feeling.

In 2019 I had got in touch with a well-known high-street brand, which I actually like and respect, and told them that unless they fixed their email unsubscribe button, I would be forced to speak to the ICO about them.

They were lovely about it, apologised profusely and removed me immediately. That’s good service, despite being an email pest. I walked away feeling good about the brand again.

But the bulk of my inbox is clogged with unsolicited muck.

Here’s a small sample from the past five days:

Sent from a Gmail account (never a good start) with the opening line: “To whom it may concern”. The next began: “I’m a Certified……”

There’s a couple of problems with this.

First, it’s a Gmail account – the home of spammers and scammers the world over. I’m guaranteed to delete it before reading.

Secondly, you have no idea who I am.

Thirdly, your opening gambit is all about you. Not about what you can do for me.

Sent from an .xyz domain, which only a spammer would. It starts: “Get the Most Out of the WiFi You Pay For”.

It then goes on to promise both “The Simplest Way to Cure WiFi Deadspots in Your House” and “Ultra WiFi Booster – Your Cure for Spotty Internet”.

Again, it’s a dodgy email account on a domain name only ever used by spammers.

Secondly, it’s not addressed to me so it’s definitely spam.

Thirdly, you are assuming I have a problem with my WiFi. I don’t.

Actually, a few lumped together, all of which have the wrong headline, including words like “Stormy Daniels”, “Fitness Watch”, “CBD Gummy” and “GPS Tracker”.

Irrelevant, annoying and eating up my digital storage space.

Aside from the emails though, another big pest is LinkedIn.

Traditionally the home of sales professionals, I know a lot of people and businesses who swear by it.

My issue, however, is that too many of them think that by linking to me I’m going to immediately want their product and/or service.

As an example, I’ve currently got nine new connection requests in my LinkedIn dashboard. Let’s see what happens when I accept them….

Ok, so I’ve just accepted them all and immediately I have an email in my inbox from one of them.

Clearly this is automated, and not personalised, nor has it been actioned by the individual themselves.

It’s done by a bot; probably a very clever one, but a bot nonetheless.

Here’s one that thinks I’m an idiot: 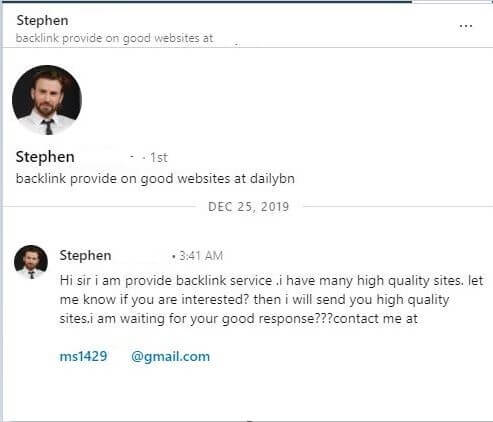 If I search Google for this image, I can find it quickly; it’s Chris Evans the actor.

Not only do they insult me by using a false photo, their name is clearly made up and they put a Gmail email address in the message.

Add to this their command of the English language and I’m left feeling that this is perhaps someone I shouldn’t touch with a barge pole.

The summary, I suppose, is that if you want my attention there are three key points that need to be addressed.

Firstly, use a genuine email address. It’s not hard to do, nor is it expensive either.

Secondly, tell me what you can do for me, not how good you are or why what you are providing beats your competitors (I probably don’t use them either).

Remember I can use Google as well and, to the best of my knowledge, Chris Evans isn’t running a backlink farm in between filming the Avengers series.